Beach Volleyball is thought to have originated in the 1920s in Santa Monica California, but these women in from Sicily in the early 4th Century might have something to say about that.

Sure, you say, but where's the net? My answer is - a net is pretty hard to replicate in mosaic. Let's call it artistic license.

The whole set of mosaics is pretty amazing.  Also known as the "bikini girls", the mosaics also include women who are apparently doing some weight training as well.
They are from the Villa Romana del Casale in Sicily, a UNESCO World Heritage site.
​

I have been thinking about photoshopping this image to remove the patches in the mosaics and make a more attractive picture. I can see people preferring it left with the authentic patches, but the items might be nicer if the images are cleaned up. If you have an opinion about it, let me know! 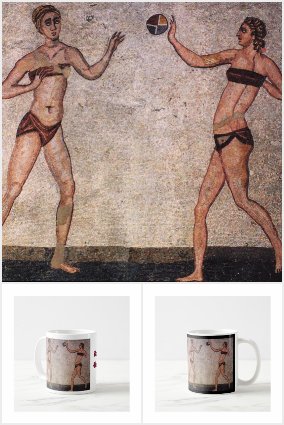